This installation was created for SEeAFAR exhibition, which toured to Folkestone Triennial and Deptford X in 2014. The work was developed in responxse to each space, appearing each time in a different manifestation.

Sarah Sparkes’ great grandfather was a Magic Lanternist; using his decaying lantern slides, rescued from her father’s shed, the artist has created a series of works illuminating the ambiguous relationship between the woman watching on the shore and the spectre of the shipwreck at sea. Projected images from a past era and optical effects are combined to explore time and illusion. Exploiting the visual aesthetics of Spiritualism, the artist has placed our visionary heroine Jane at the helm, sailing her off into the ‘ether’ in search of a lost horizon. ‘Jane Conquest Rings the Bell’ is an exploration of gender roles within the vernacular maritime tradition. Viewed through the telescopic lens of history it presents a subversive interpretation of the the standard of ‘the Wife’s Lament ‘.

“in our island tradition of maritime songs and sea shanties, we have become accustomed to this sound of wives lamenting, to women pining for men over the waves, and this essential idea of being separated by water. And, though there are some notable exceptions, in these songs of the sea the women are nearly always left standing on the shore.” Laura Barton The Wifes Lament, The Guardian, (March 6th 2009) 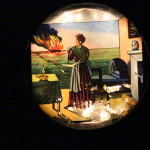 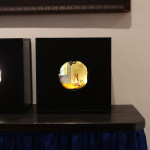 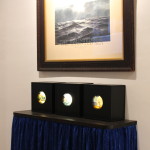 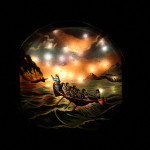 In this project, art is seen as a visionary activity in which memories or emotions or abstract ideas are visualised and communicated to other people. The title Seeafar is a play on words combining the idea of the missing seafarer with the idea that the artist sees afar – having visions from beyond her own immediate space and time. Recalling the perspective of the one who waits without knowing whether the seafarer will return home from overseas – these works explore the visionary act of conjuring forth the presence of the departed: those who exist only in memory or in the imagination.
The act of making becomes an empowering process that enables each one of us to think things into the world, to reveal the hidden and make manifest the unsaid, in other words to express concepts or feelings that can’t quite be put into words and share them with others.

‘He will not have been (a) present but he will have made a gift by not disappearing without leaving a trace.’ (Jacques Derrida in Re-¬‐Reading Levinas,1991)

SEeAFAR was curated by Birgitta Hosea